Several years ago, the BBC produced a series called A History of the World in 100 Objects based on a collection of items housed at the British Musuem.  One of the items highlighted is a thousand year old Viking hoard that had been recently discovered by two amateur detectorists in England near York.  The Vale of York Hoard, as it now known, was a history mystery, and it stood out to me as something that might hook my students in developing their historical thinking skills.

As a new discovery, the artifact had no narrative, and it was up to scientists and historians to uncover a possible narrative for the hoard based on critically thinking about the evidence contained in the hoard.  First of all, what is it?  How could one understand what the artifact was since it didn’t come with a museum tag.  What did it contain?  How could sourcing the contents reveal it object’s purpose or significance?  How did all these items come together? Are they similar or different?  What technology might be involved that brought these diverse objects together?  To whom did these objects belong?  What might their lives have been like? And, finally, why was it buried?  Who might have done so? 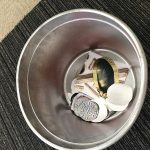 Over the years, I have tried to incorporate these skills into my classroom by coming up with a very rudimentary “hoard” simulation.  It’s a fun story, but I am not sure that my students have really fully understood the point of the lesson.  While it’s clearly evident to me that historians had to figure all this out, the lesson was rushed, and frankly, a little incomplete using paper coin replicas.  I’m not sure that I gave students an opportunity to cross the threshold by making my thinking visible to them.

My idea is to build a small archive using items from the hoard made available by the British Museum using a Creative Commons Attribution-NonCommercial-ShareAlike 4.0 International (CC BY-NC-SA 4.0) license.  Then I would create a PBL (Project Based Learning) unit around the items in the archive.  Drawing upon the concept of being a “virtual intern,” students might each be assigned an object and investigate the item by asking some of the historical thinking questions listed above.  I can pull from this archive to create scaffolded resources in Scalar, Omeka, or some other forum, that will guide each student on the journey.  Pulling from the idea of the importance of narrative, students might each write a short piece imagining to whom each individual object might have belonged.  Finally, students could work in small groups to examine individual findings and work to develop a larger narrative about how the object came together.  Perhaps there could be a history prize for the group whose best demonstrates historical thinking skills or one for the narrative that comes closest to that developed by the British Museum.

One pitfall that I see is that clever students might “Google” the name of the coin and accidentally (or on purpose) stumble on to the real story of the Vale of York hoard, thereby ruining the game.  However, it’s something that I’m willing to take the risk of trying in order to help my students that the written history they read in textbooks has to be uncovered by real historians using the skills of historical thinking.