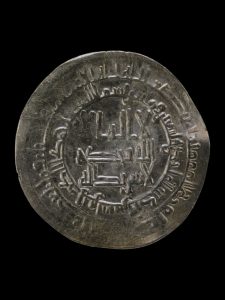 This image is one of the many coins found in the Vale of York Hoard at the British Museum.  It is comparatively rare in the collection in terms of the the number of coins found in the hoard; it is also extraordinary when one considers how far the coin traveled from its origin in the Samanid Empire in what is now today Afghanistan along with portions of Iran, Turkmenistan, Uzbekistan, Tajikistan, Kyrgyzstan, Kazakhstan and Pakistan.  I can imagine how it moved along pathways, through deserts, along dusty roads, down rivers, through forests and across the seas, stashed in the pockets or purses of its various possessors. Or, perhaps it belonged to one extraordinary individual who was able to trade and travel, amassing the fortune he needed to hide in a Yorkshire field over 1,000 years ago.  I can image that a sister coin, struck immediately after this one, might have traveled a different route, heading east along the Silk Road to China.

I chose this coin because it does come from such a great distance and has such potential for a great story.  Yet, how do I flesh that story out of my students?  What tools do I need to give them in order to tease out meaning?  What context will they need prior to their encounter with these objects?

In teaching what happens after the collapse of the Roman Empire, I tend to vary my next move.  Some years, I move straight into the early Middle Ages and other years I go directly to study the rise of Islam and Islamic empires.  Clearly, it will be important to teach the introductory unit on Islam first.  That will give them some context as to what Arabic looks like and might help them deduce geographic possibilities as to where the coin originated.  It will also be helpful for them to have had some background on the Vikings and the concept of the longboat and its capabilities.  Students are familiar with Leif Erikson’s story, but will they be able to think about Vikings who went in the opposite direction, into the innermost parts of Europe and on to Asia.

I also wonder about how I might build in some scaffolding if they get stuck.  I’ve thought of incorporating a multiple choice style activity once they’ve had time to explore and come up with possibilities.  A student might not know what language is on the coin, but she might be able to choose it from a curated list.  Another option might be to give them some “lifelines” along the lines of the game show “Who Wants to Be a Millionaire?” where they get to ask a friend, call an expert or use a web search.  Students who keep their lifelines might receive a small prize like a sucker or a free homework pass.

I am excited by the possibilities of the lesson, but I remain mindful of keeping it targeted so that it doesn’t become too time consuming or unwieldy.